Anne:  Danish experts Gert Asmund and Violeta Hansen from the Danish Center for Environment and Energy University of Aarhus have mentioned to me that Cluff Lake is a good example of uranium mining remediation. Do you agree?

It is much too early to determine the long-term success or failure of remediation efforts at Cluff Lake. There has already been one spectacular failure at that site, and there may be more to come.

The Cluff Lake mine operated for 22 years, from 1980 to 2002. It was the first completely non-military uranium mine in Canada, and the first of a new batch of high-grade uranium mines developed around the rim of the Athabasca Basin, in a remote part of Northern Saskatchewan, far removed from population centres.

A few decades earlier, over five dozen lower-grade uranium mines had operated in an unregulated fashion near the northernmost border of the province, at a place called Uranium City. Starting out as a tent city, it later developed into a thriving mining town – but it is now largely deserted. The population crashed when the mines shut down in 1982. Extensive radioactive contamination occurred at Uranium City because huge volumes of uranium wastes were dumped into surface waters and were scattered far and wide by wind and rain. Hundreds of millions of dollars are currently being spent in an attempt to remediate some 67 abandoned uranium mining and milling sites, most in the vicinity of Uranium City.

In 1977 the Government of Saskatchewan established the Cluff Lake Board of Inquiry into Uranium Mining (also known as the Bayda Inquiry) to determine under what conditions, if any, the newly discovered rich deposits of uranium at Cluff Lake and elsewhere in the Athabasca Basin could be mined in an environmentally acceptable manner. The mining company assured the Board that the most radioactive wastes from the Cluff Lake ore would be safely isolated using an advanced engineering concept. The richest uranium tailings would not be dumped into the environment or flushed into “tailings lagoons” behind earthen dams, as they were at Elliot Lake in Ontario. Instead, these wastes would be placed in thick-walled concrete vaults designed to last for 100 years or more. The walls of these vaults would be lined inside and out with an impermeable membrane to prevent radon gas from escaping into the atmosphere and to minimize leakage of radionuclides into surface water and/or groundwater. The vaults would be positioned above the water table and below the frost line, to minimize the ravages of extreme weather. Each vault would be surrounded by one or two metres of sand and gravel for extra protection, and to further attenuate radioactive releases.  Equipment would be installed to monitor the drainage runoff from the vaults on a regular basis with treatment to remove radioactive contaminants as needed.

On the basis of this testimony, the Cluff Lake Board of Inquiry’s Final Report in 1978 recommended that the Cluff Lake mine be allowed to proceed. And indeed, the mining company did build hundreds of concrete vaults to contain the most radioactive tailings. (1) Originally the vaults were stored in a large warehouse but the gamma radiation levels became so high and were so dangerous for the workers that they had to move the vaults outside onto an elevated concrete pad. They were simply stacked on top of each other, as shown in the photo below. 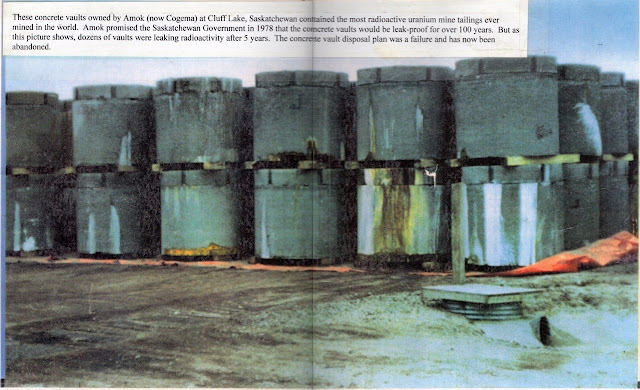 Before long, dozens of these vaults were cracked and leaking – as seen in the photo. Due to faulty preparation, winter freezing and thawing, and heaving of the ground, many of the vaults tipped over; the tailings inside spilled onto the ground and flowed downhill from the elevated knoll where the concrete pad was situated.

The advanced engineering concept put forward by the proponent and endorsed by the Cluff Lake Board of Inquiry had become an abysmal failure – a fiasco. Neither the mining company, nor the Saskatchewan Department of the Environment, nor the Canadian Nuclear Safety Commission, would release any public information on how the problem of the leaking vaults was being dealt with. It took a private citizen, Maisie Shiell, who persisted and finally got information from Washington, DC, using the USA Freedom of Information Act. She discovered that the “leaking vault” problem was “solved” by the company by simply recycling all the radioactive tailings stored in the vaults through the mill once again with the excuse of extracting any residual gold that might remain in the tailings. Then the residues were simply dumped into the tailings lagoon – thereby doing what the company had assured the Board of Inquiry they would never do. To the best of my knowledge, the vaults were also dumped into the lagoon; presumably, they are still there and are likely still leaking. These structures, designed to last for one or two centuries, did not survive for a decade. Dozens were leaking within five years.  Meanwhile, the radioactive tailings are known to remain hazardous for millennia.

The Cluff Lake experience is troubling. It illustrates just how wrong the mining companies and regulatory authorities can be when confronted with such a daunting task – keeping radioactive sand out of the environment for hundreds of thousands of years.

It also shows how easily a public body like the Cluff Lake Board of Inquiry can be misled by empty promises. And how unwilling authorities are to acknowledge or document their mistakes.

It is revealing that the 2003 Comprehensive Study Report on the Cluff Lake Decommissioning Project by the Canadian Nuclear Safety Commission, makes no mention whatsoever of these specially engineered but ill-fated vaults promised by the proponent in 1977. The story is not even found in section 2.4 of the CNSC Report, entitled “Site History”.

The Danish experts that you refer to in your question may be unaware of the history of the radioactive tailings vaults at Cluff Lake because the CNSC has been careful to erase that history from its documents. Indeed, the lack of independence and lack of objectivity of the Canadian nuclear regulatory agency have been pointed out on numerous occasions.  It is important to recall that the Government of Canada created the Canadian uranium industry and the Canadian nuclear reactor industry as outgrowths of its direct involvement in the WWII Atomic Bomb Project. The Canadian government has been directly involved in the sales of nuclear reactors and uranium to other countries – sales measured in the hundreds of millions of dollars. In 2008, the Canadian Government fired Linda Keen, the President of the Canadian Nuclear Safety Commission, simply because she tried to enforce the safety requirements that were clearly laid down in the licencing documents for a nuclear reactor at Chalk River Ontario. In doing so, the Government seriously compromised the independence of the regulatory agency.

The Canadian Government has spent billions of dollars supporting, promoting and defending uranium mining and nuclear power.  Prime Minister Pierre Elliot Trudeau, the father of our current Prime Minister, Justin Trudeau, even spearheaded an illegal international price-fixing cartel in order to boost the price of Canadian uranium. It is not surprising then that similar attitudes aimed at defending and promoting the nuclear enterprise in Canada, including uranium mining, are to be found in the Government-appointed regulatory body.  Back in 1980, when the Cluff Lake mine was just starting up, the British Columbia Medical Association published a 400-page report entitled Health Dangers of Uranium Mining, stating that the Canadian nuclear agency was “Not Fit To Regulate” uranium mining (Chapter 22). That report contributed to the BC Government’s decision to ban uranium mining from the province.

Last year, in July 2015, the President of the CNSC wrote a letter to the Minister of Environment of Quebec denouncing the recommendations and conclusions of a report on uranium mining issued by a provincial environmental assessment panel after a year of public hearings. In his letter, the CNSC President rejected the report's suggestion that uranium mining could pose serious safety challenges. It is highly irregular for any licensing agency to intervene in such a way at the political decision making level.  Quebec currently has a moratorium on uranium mining in the province, and is considering whether to ban uranium mining permanently, as has been done in British Columbia and Nova Scotia.

In the USA, the Commonwealth of Virgina has maintained a moratorium on uranium mining since 1982.  Under pressure to lift that moratorium, the Government of Virginia asked the US National Academy of Sciences to conduct an inquiry into the potential adverse impacts of uranium mining in Virginia. The NAS Committee charged with conducting that inquiry included a review of uranium mining practices in Saskatchewan, with particular emphasis on the Cluff Lake decommissioning. In that context, the 2012 NAS report (2), Uranium Mining in Virginia, was not based solely on documents of the CNSC. The Committee spent four days in Saskatchewan in June 2011, visiting various mine sites and holding a series of meetings – some closed, some open – in which the Committee directly interacted with representatives from the mining companies, the Canadian Nuclear Safety Commission, several Saskatchewan government departments, the Canadian Environmental Law Association, Saskatchewan health authorities, distinguished academic experts in geology and mining engineering, and members of the general public. Based on that experience, the Committee reported a number of important reservations about the long-term safety of the Cluff Lake Decommissioning work.

You may want to ask the Danish experts that you cite in your question whether they have undertaken a similarly detailed review of the Cluff Lake situation before formulating their expert opinion on the matter.  Did they visit the Cluff Lake site and interview local residents and other stakeholders?

The Cluff Lake mine only operated for two decades.  The hazards and the need for monitoring will persist essentially forever. It must be remembered that the greatest environmental difficulties often arise long after the mine site has been abandoned.  As the National Academy of Science Report says:

“Tailings disposal sites represent potential sources of contamination for thousands of years, and the long-term risks remain poorly defined. Although significant improvements have been made in recent years to tailings management engineering and designs to isolate mine waste from the environment, limited data exist to confirm the long-term effectiveness of uranium tailings management facilities that have been designed and constructed according to modern best practices.

“Significant potential environmental risks are associated with extreme natural events and failures in management practices. Extreme natural events (e.g., hurricanes, earthquakes, intense rainfall events, drought) have the potential to lead to the release of contaminants if facilities are not designed and constructed to withstand such an event, or fail to perform as designed.”

1) Excerpts from the 1978 Final Report of the Cluff Lake Board of Inquiry dealing with those concrete vaults: Section 7 of Chapter 2 is titled ‘Waste Disposal’. Sub-section 7(a) discusses the concrete vaults.


3) Letter written by the President of the CNSC:

4) Gordon Edwards' critique of February 22, 2016, regarding
misinformation provided by the CNSC to the Quebec Government: