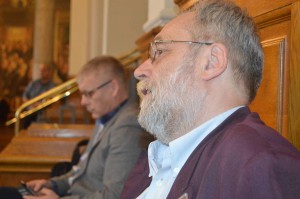 Anne: Gerhard Schmidt, I am pleased to have the opportunity to
interview you on my blog. You are a chemical engineer and a senior researcher working for Öko-Institut in Darmstadt, Germany, as an expert in radioactive waste management and final storage, environmental impact assessment (nuclear facilities, uranium extraction) and remediating radioactive sites. (Photo 1)

I would like to ask you about the REE/uranium mining project at
Kvanefjeldet/Kuannersuit.

Q1 Anne: The Company has just published a presentation/an update of the Kvanefjeld Project. Do you have any comments regarding this update?

Gerhard Schmidt: I did not check the whole presentation on that project. My expertise is more on the "back-end" of such production and on the environmental impacts. And in both fields I did not find really surprising news. As far as my expertise is concerned I will read more carefully later on in the process.

Q2 Anne: What are the advantages and disadvantages by using Taseq as a disposal for tailings?

Gerhard Schmidt: The planned mining will result in large masses of mined materials and wastes, so the mine and tailings waste management is a relevant part of the operation and also of the environmental impacts to be expected by such mining. The potential impacts of such mine and tailings have to consider both radioactive as well as chemically toxic constituents. Both types of constituents are already available in the ore, but in an immobile form so that the hazards are currently either negligible or even non-existent. Mining and milling of the ore mobilizes those constituents, by crushing the ore and treating it with chemicals. So the end point after finishing mining has to be to immobilize those constituents to a form that is as immobile as those were before mining had started. So best-as-possible physical enclosure of those wastes, isolation from the environment and sustainable inertness of those wastes are the base requirements that should govern the selection process of waste management options.

By disposing tailings in a lake none of those basic requirements are respected and can be met. Natural lakes have a steady inflow and outflow of water, surface erosion is maximized by this flow, and disposed constituents are in a steady contact with large amounts of water so maximizing leaching of those constituents. Sustainable (long-term) isolation of the wastes from the environment is impossible under those conditions.
As the negative impacts of such disposed, but permanently leaking mining wastes are a well-known phenomenon, the European Mining Waste Directive requires the sustainable disposal of such wastes in mine openings, where those wastes can well be effectively isolated. Water flow though the disposed material has to be minimized by sustainable covers, designed to divert any surface water (e. g. rain water, melting water) away from those disposed tailings. The design has to guarantee that this installation fulfills its task over very long time (state-of-the-art are e. g. 1,000 years) without permanent active maintenance and repair. So it has to withstand natural climatic conditions, such as long dry periods as well as extreme rain, ice and snow events without eroding away. Hazardous waste constituents should not be able to travel through the installed cover, so the cover has to prevent upward diffusion by design. In a lake environment with its permanent high erosion rate, it is impossible to install such a sustainable cover as it is eroded away in e. g. less than ten years.

The only advantage of disposal in lakes is that it is a simple and a cheap management option in the short term, during operation. That is why this is preferred. But economic advantages can, in the long term, turn out to be the less economic option. Numerous examples can be cited where those costs then were transferred to the general public because the effects were only visible long after the company had left the place, and post-clean-up had to be financed publicly. Or, is not performed at all because the public is not willing to pay for that. Or, if the company still exists, the potential bankruptcy of the owner prevents mine waste regulators from enforcing more sustainable options. In both cases the consequence is a permanently leaking disposal facility.

Q3 Anne: Do you have any comments on the costs and profits of the
REE/uranium mining project?

Those projects outside China currently suffer from the low market price for Rare Earths. So starting an additional project for an already saturated market, that is unbalanced in that mine and mill tailings waste management costs are simply not covered by the current market leader but will rest with the Chinese taxpayer, is very risky. This would only be viable if the product offers an advantage over all the other competitors. This could theoretically be chemical purity, higher supply reliability or a greener production than that of the competitors. I do not see that one of these advantages is applicable or can be claimed with a higher reliability or better performance.

Q4 Anne: Do you have some advice to the Greenlandic people?

1. It is only wise to remain sceptical about any promises made.

2. It is also wise to go into the details of waste management of mining companies to avoid being forced as a back-up financer in the long term for failed or unacceptable disposal concepts.

3. Even though complicated, it is wise to know and understand as much as possible of the implications of waste management options.

4. Be interested and care for your environment, not many people else than you have a large interest in that because it does not generate much money to respect that (in most cases it is even more expensive).

5. Know as much as possible about mining experiences (both the successes and the failures) in other countries and industries, as it can increase your ability to better understand what is to be expected in your case, on what is relevant or not for you and how you can force other interested parties to respect your interests.


Anne: Thank you for the interview!

1. Photo: Gerhard Schmidt at the conference at Christiansborg about the radioactive waste in Denmark March 23th 2015.

2. Other interviews about the uranium mining project at Kvanefjeld: